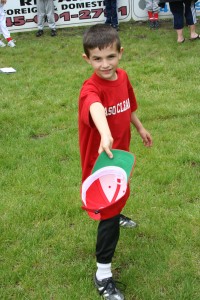 Most parents will tell you that each and every one of their children are different. I know both of my boys are completely different and It makes for an amazing mix. I love it. Although it does have it’s challenges, some days are just not easy. For me, I have a sports player and a non sports player. My oldest is always being dragged around to a practice or a game. I guess this is payback for all the therapies I had to drag his younger brother to when he was a baby. My oldest son has some special needs and things are very black and white for him. He just doesn’t get the in between stuff. It always makes for an interesting conversation during which mommy fantasizes about getting home and cracking open a bottle of wine. Here is one of them:

N: Mom, I don’t understand this game. I thought it was like baseball.

M: It is like baseball, but they hit the ball off that stick thing.

N: Yeah, I know, but why aren’t they catching the balls. ( The coach is playing catch with the kids.)

M: Well, they are just learning how to play.

N: I don’t get it. Why won’t they catch the balls?

M: Because they are 5 and 6 years old and just learning to play. That’s how you learn.

N: Why would you want to play if you can’t catch the ball?

Some time passes and now the kids are hitting the ball off the T and running to the bases. They really don’t know where they are going and it’s kind of funny to watch for everyone except for my son.

N: I really don’t get this game.

M: You will once they start playing a real game.

N: Well, look at Owen! He’s on base talking to the other teams player. That’s not allowed! Why won’t he stop talking!

M: He talks to everyone and never stops. It’s okay.

N: I don’t get this game. I’m going for a walk. My head hurts. I can’t watch this anymore.

Eventually, he was able to watch a practice without all these thoughts running through his head. For me, it just makes it difficult to connect with others when I’m at such events. I try my best to support both of my sons interests. I just wanted to put this out there as a reminder. You really have no idea what is going on with that family standing right next to you.