Something happened to me this weekend at my son’s football game, although it’s hard to explain I’m going to give it a try. First let me give you a little background. My son is on The Tiny Mites team which is basically 5-7 year olds. This is his second year on the team. His first year was tough. His teammates picked on him, he didn’t know the rules and he cried a lot. I cried a lot. He kept wanting to go back and I just couldn’t understand. I admired his resilience. He was so much stronger than I thought he could be. He taught me a lesson in never giving up. This year he wanted to play again and it’s been good. No more crying. He’s been having fun and able to make his way even when things aren’t the way he thinks they should be. I wish some of the parents and relatives of the other players thought that way too.

At this past Sunday’s game my husband was a bit uptight. He had taken our son to an away game the weekend before and he was upset that our son spent most of the second half on the bench. I asked my son what happened and he replied, ” I think I played so good that the coach decided to give me a break.” I laughed and agreed with him. My husband didn’t think it was so funny. These are little kids and everyone should get to play whether they are good players or not is what he said, “I think they sat him out because they wanted to win.” My son didn’t seem to mind so I wasn’t going to fret about it. After all it is the end of the season, and I don’t want to be that parent that causes a stink.

Okay, so back to Sunday’s game. While the boy’s were playing another boy told the coach that he was tired and didn’t want to go in. The coach then sat him out. A relative of the boy (also an important member of our community) did not take this well. This person told the boys parents that, “Wimps aren’t winners” and they would tell the boy that they no longer will be coming to any games. The boys father stood up for his son and replied, “Why would you say that to him? That is only going to hurt his feelings.” This person went on and on during the game about how disappointed they were in this child. Take note he’s about 7. I couldn’t even look at them. At some point my son also choose to tell the coach that he was tired and wanted to sit the rest of the game out. Between the two my husband said, ” I’m really sick of this crap.” I myself, I had my moment. 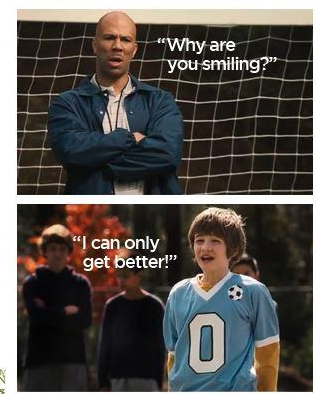 I had a Timothy Green moment. If you haven’t read my review check it out HERE. I loved this film. In the movie Timothy’s parents create him before he comes to them. One of the dreams that they had for their son was that he score the winning goal and they even practice cheering for him. When Timothy comes into their life he is anything but a star player, he’s an awkward disaster with positive energy. He reminds me of my son. He never stops trying. He does end up scoring the winning goal, but for the other team. His parents fight about it later that day. They learn just like I did and just like I reminded my husband, sometimes you do get what you asked for, but in a different package. It’s in that package that you learn to love and love unconditionally. My son had a great time playing and when he was done he was done. There is a difference between helping someone achieve greatness and pushing someone to be something they are not. I am proud. I am so proud that my son is so happy and always sees the positive in things. I would never want to shame him or make him feel like he’s less than the amazing person that he’s become. I beg you, watch your words with your children. Each and every single one of them has special gifts. It’s up to us to help them find those gifts. It might cost you several lessons, or classes, or boring recitals, but it’s part of the journey.

On his first day of school Timothy’s dad tells him, “Have a great day!” The mom stops the dad and says, “That’s too much pressure, too much pressure!” His response: ” Have the day you have!”

Parents: You will never be loved this much again. Enjoy your children for all their gifts and all the faults. They love us no matter what-right? Now, go and have the day you have!