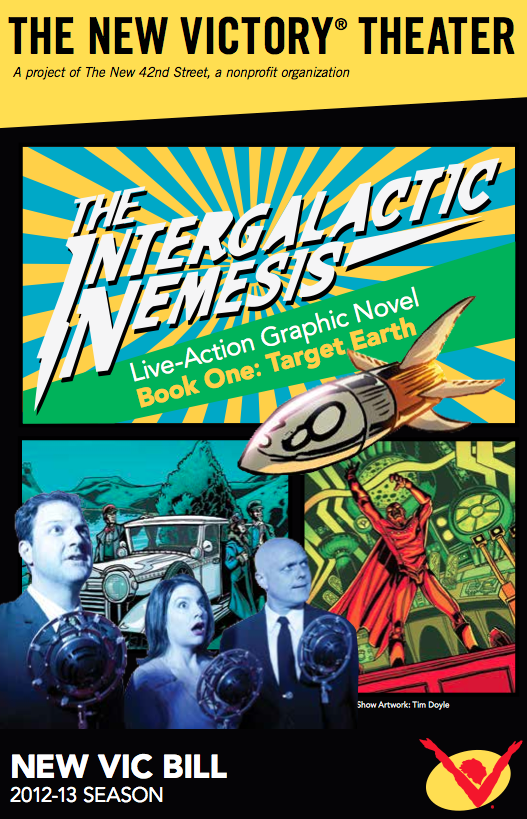 The show is an incredible mix of of over 1,000 hand drawn, full color comic book panels projected onto a large screen, while the actors perform as if taking part in a radio serial. Add to that mix a onstage foley artist and musician performing music, sound effects and voices for the show. It is something I have never seem before, truly out of this world! Take a peek below:

Honestly, it’s pure genius! If you are looking for something different this is it. There were times when I felt as if I was back in an old time radio studio watching the actors and the foley artist perform. I’m sure my kids knew what to make of it at first. They are 7 and 9, but after a bit they got into it. The show is for ages 7 and up, but I’d say depending on your child I would make it 9 and up. It’s 2 hours long with a 15 minute intermission and that might be a lot for the younger set. My whole family enjoyed the show and the kids were thrilled when they announced that Book 2 would make it’s debut next year. If you have a chance I’d see this show while it’s there, it truly is unique and I doubt you’d be able to find anything like it. Another plus, if your husband or partner isn’t a big fan of theater this might be something that they could get into. It has a wide appeal.

About THE INTERGALACTIC NEMESIS:

THE INTERGALACTIC NEMESIS BOOK ONE: “TARGET EARTH” is written, produced and directed by Jason Neulander and features Danu Uribe, David Higgins and Christopher Lee Gibson voicing all 24 characters. They are accompanied by Cami Alys, Foley Artist and Kenneth Redding, Jr., Keyboardist. The creative team consists of Comic-Book Art by Tim Doyle, Sound Effect Design by Buzz Moran and Original Score by Graham Reynolds. Agustin Frederic serves as Technical Director and Sound Engineer, and Jessie Douglas is Company Manager. The Intergalactic Nemesis is adapted from the stage play by Jason Neulander and Chad Nichols and from the radio drama by Ray Patrick Colgan, Jessica Reisman, Julia Edwards and Lisa D’Amour. The radio drama is based on an original concept by Ray Patrick Colgan.

Following its run at The New Victory Theater, THE INTERGALACTIC NEMESIS BOOK ONE: “TARGET EARTH” will additionally tour throughout Canada and the United States, including a presentation at the Spoleto Festival in Charleston, South Carolina.

For Ticket and Further Show Information:

THE INTERGALACTIC NEMESIS BOOK ONE: “TARGET EARTH” has a running time of 2 hours, including one intermission, and is recommended for everyone ages seven and older.

Theater-goers who buy tickets for three or more NEW VICTORY shows in the current season qualify for free Membership benefits, including up to 35-percent savings on tickets all season long. To purchase tickets online, visit NewVictory.org, and to purchase by phone, call 646-223-3010

The New Victory Theater box office (209 West 42nd Street) is open Sunday and Monday from 11am-5pm and Tuesday through Saturday from 12pm-7pm.

Disclosure: I received tickets in order to facilitate a review. All thoughts belong solely to me and my family.