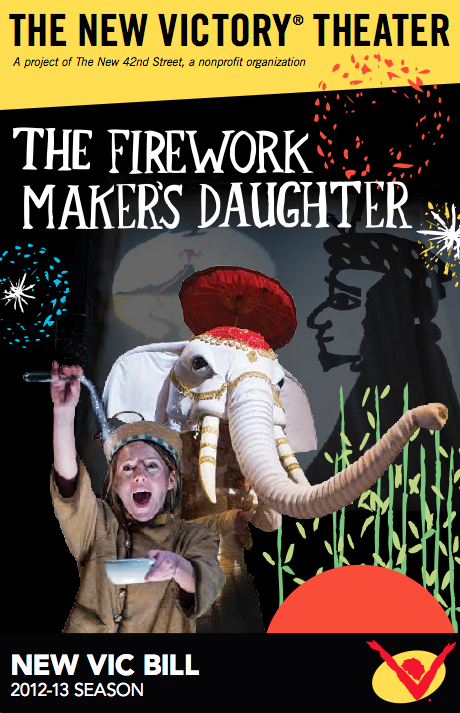 When I received an invite to review the show, The Firework Maker’s Daughter, I wasn’t so sure that my two little boys would be interested in seeing an opera. I was wrong. Once again I had one of those moments of surprise as a parent. My boys 9 and 7 sat at the edge of their seats paying attention to every detail. I was amazed. Honestly, I’m not a huge fan of opera, but was moved by the beauty of this story. As a parent and theater goer I loved the use of shadow puppetry and the creativity behind creating fireworks using old school overhead projectors. My children were entranced. We also had a few laughs along the way of learning an important lesson. My husband loved the fact that the story seemed like a traditional tale ending with a moral. If you have the opportunity to be in New York City and want to introduce your children to a different genre of theater The Firework Maker’s Daughter is perfect. The New Victory Theater is right on 42nd Street were all the excitement happens, plus it’s an affordable way to experience New York theater.

THE FIREWORK MAKER’S DAUGHTER makes its American debut at The New Victory Theater,209 West 42nd Street from May 3 through May 12, 2013.

About The Firework Maker’s Daughter:

Based on the enchanting novel by acclaimed author Philip Pullman (His Dark Materials trilogy), this captivating new opera tells the story of one girl’s quest to become a firework maker. Determined to master Crackle Dragons, Leaping Monkeys and Golden Sneezes, Lila tests her talents and gambles her good fortune as she parlays with pirates, grapples with ghosts and faces off with a ferocious fire-fiend. Featuring an internationally-inspired score by David Bruce and a witty libretto by Glyn Maxwell, THE FIREWORK MAKER’S DAUGHTER ignites with performances by New York’s Metropolis Ensemble chamber orchestra, led by Grammy-nominated conductor Andrew Cyr, and a cast of five artists who enliven handcrafted puppets from Cambridge’s Indefinite Articles. Set in a fantastical land where animals talk, goddesses reign and imps dwell.

For more information or to buy tickets visit: http://newvictory.org

Disclosure: Tickets were given to me to attend this performance. All thoughts as always are my own!