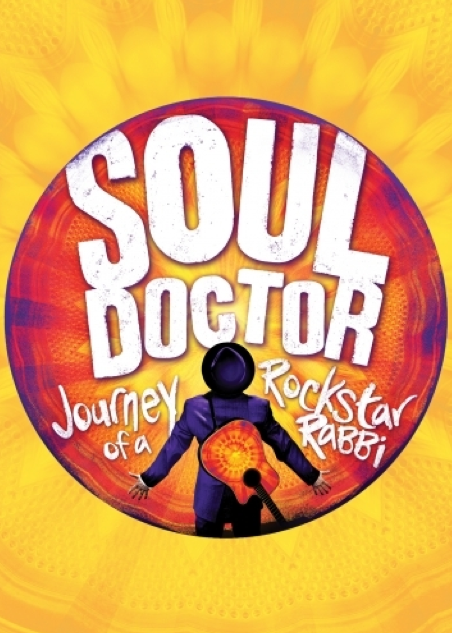 I have always had this dream that my life would be interesting enough to have someone want to make it into a Broadway show. Who knows? Maybe someday, but until then I got to enjoy learning about Shlomo Carlebach. Soul Doctor: Journey of a Rockstar Rabbi is based on the life of Shlomo Carlebach. Shlomo turned the world around with his popular music. After escaping to America from Nazi Germany he began many long years of studying to be a Rabbi like his father. Music was something that always touched his heart and after several chance encounters with people he met up with Nina Simone. Still an unknown singer at the time their friendship became a powerful force in both their lives. She introduced him to gospel and soul music. He was inspired to bring people of faith together through music. Now throw in the fact that this was happening during the 1960’s  and he was able to effortlessly blend his message of faith and love through modern music. He became the Soul Doctor. The show’s score features all of his hits orchestrated for Broadway.

My husband and I had a great time. The Circle in the Square Theatre is the perfect place for this particular performance. The actors use the entire theatre and you actually feel as if you are part of this show. I was under the impression that this was going to be a big concert, but it was so much more. This show handles some tough topics such as Nazi Germany and racism. Miraculously even when things seemed to take a grim turn the cast was able to turn it around quickly. I found that quite powerful. The show was remarkably well cast. Eric Anderson is incredible as Shlomo. The big question of the night was : Is he Jewish? No, no he’s not, but his attachment to the character and knowledge of the  faith is apparent. He’s a strong actor and would have to be because Amber Iman almost steals the show as the “High Priestess of Soul” Nina Simone. Her sultry voice was hypnotizing. The chemistry between Anderson and Iman’s characters was amazing. I love how they bonded over issues of race and faith.

Another underlying theme was Shlomo’s relationship with his father and having the strength to follow his own vision for his dream not his dads. When I left the theatre I was not only inspired, but filled with song. I wanted to celebrate life. I wanted to take a chance on my dreams. This is a show that shouldn’t be missed.

A Funny Thing Happened to Me at the Theatre:

After coming back to my seat at intermission the gentleman and woman sitting next to me asked me if I was Jewish. I said, “No.” He then asked my how I came to get tickets to this show and why I would want to see it. I felt a bit awkward at first wondering why he would even ask me that question. Nervously, I explained that I would  be writing a review for the show. Then the conversation took a turn and he began telling me the history of Shlomo Carlebach and about how he met him on campus once. I was fascinated to have this piece of history given to me. Then he told me he was wondering what a “non-Jewish” person was thinking during the show. I replied, “Well, I was actually wondering what a Jewish person was thinking while watching the show.” We laughed and exchanged some commentary about the show. It turned out to be a good conversation and we both agreed that it was a good show. My point in telling this story is that theatre isn’t just about sitting and watching a show. It’s about making people feel things and talk about things that they might not have before that experience. Just because this story is about a Rabbi doesn’t mean that it holds value only for people of Jewish faith. You learn that quickly when you realize the powerful relationship that a Rabbi and Black Jazz singer developed in a time when that was unheard of and scandalous. They discovered how similar they actually were to each other.

Disclosure: No compensation was received for this post. Tickets were given to me in order to facilitate this review. My family and I love New York and the wonderful theatre it has to offer. tickets were provided to me by  Culture Mom Media LLC. Thank you.