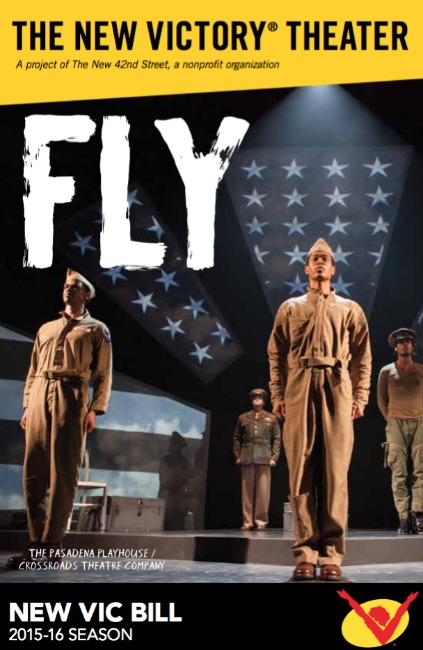 *Contributing writer Marcia Kellogg and her son attended a performance of FLY this Sunday compliments of the New Victory Theater. Here are her thoughts!*

It is no secret that our family loves the programming at The New Victory Theater (NVT). We have been endlessly entertained by the child-focused shows, and FLY, a joint effort by Crossroads Theatre Company and Pasadena Playhouse, was no exception. C and I attended the Sunday show, and it was a moving and powerful production. This presentation is centered on the training and combat experienced by the famed Tuskegee Airmen, America’s first black military pilots who trained and fought beginning in the Second World War. NVT suggests that attendants be aged ten years and up, and I agree. Strong language including mild cursing and offensive racial slurs are used in context. There are also visual images of aerial combat and strobe lighting. 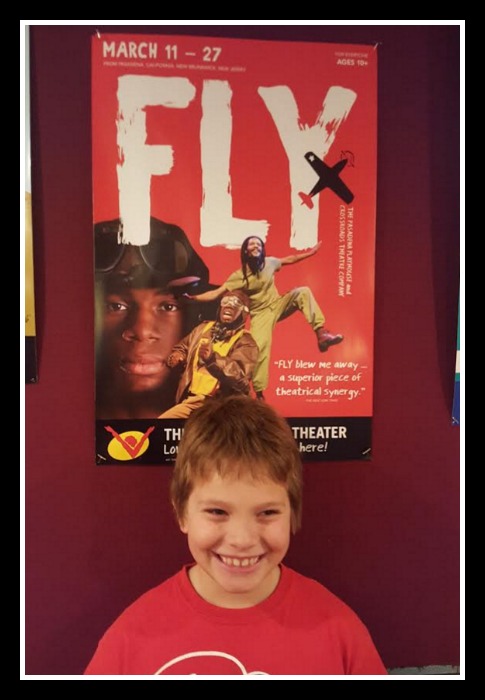 One of our favorite elements of NVT programs are the “Family Engagement” activities offered before and/or after the show. For FLY, an art station is set up for ticket-holders to learn about the patches worn by the Airmen after they earned their wings. There are examples on stickers as well as blank sticker where the kids can create their own “patches”. An interactive timeline of black history in America is posted, and attendees are encouraged to add important people, dates, and events. In the background, slides of the aircraft play on a large screen. Unfortunately due to sudden illness, we were not able to attend the post-show “TXT MARKS THE SPOT”. Ticket holders are given a map and instructed how to use their mobile devices to follow clues around the theater and work together New Victory Teaching Artists to complete challenges, learning more about the show and the New Vic. I’m so disappointed we were not able to attend, but the program will be offered at the upcoming show The Pied Piper, so we hope to participate then. 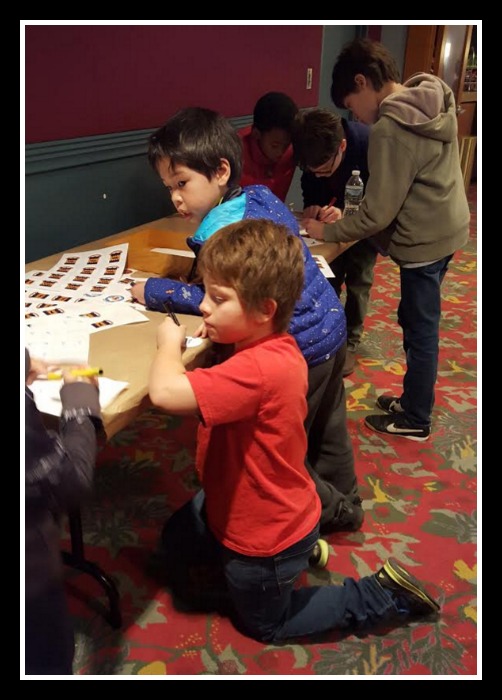 Once seated and ready for the show, the audience is treated to some amazing footwork by Omar Edwards (as Tap Griot) . He appears throughout FLY as a visual emotion presentation. Omar’s dancing is truly amazing as he can imitate the sounds of a plane engine and pull the viewers into the raw feelings of the story. There’s a brief scene on the steps of the Nation’s capital and introduction to four airmen recruits before they head to the training camp in Alabama: street-smart ladies’ man W.W. (Brooks Brantly), wet-behind-the-ears Harlem born Chet (Desmond Newson), family and race man Oscar (Terrell Wheeler), and Jay Allen, a West-Indies transplant who has enlisted to make his father proud.

As the show commences, the men endure the difficult academic and physical training all pilots meet, but they are under the thumb of a hard-nosed and demeaning Capt. O’Hurley (Anthony J. Goes). They have to learn to put aside their individual differences and ego to band together and prove their dedication and worth.

From training to combat over Germany, this group of Tuskegee Airmen grow into their roles as American heroes, and finally, proving to fellow pilots (Ross Cowan and Brandon Nagle) and the nation that they are truly deserving of the title.

As a nine year old, a lot of the deeper moments and inferences went over C’s head. He enjoyed the play immensely for the dancing and often-comedic moments, but we haven’t talked at length about racism. He has learned a lot of facts in school, primarily about the Civil Rights Era, but he’s from a time when we have an African-American president, diverse classmates and teachers at school, and friends of many ethnicities. I feel it is extremely important to teach him the history and importance of black history, and FLY will be a great tool going forward. When he’s feeling better, I look forward to hearing his questions and feelings more.

Personally, FLY was very enlightening and moving throughout. The way the scenes are peppered with outstanding dance and visual effects played against cockpit styled screens really brings you onto the stage and into the moment with the actors. I was especially touched by the portrayal of combat. This program really is a must-see for families with older children and adults who wish to advance their understanding of the times of the Tuskegee Airmen. 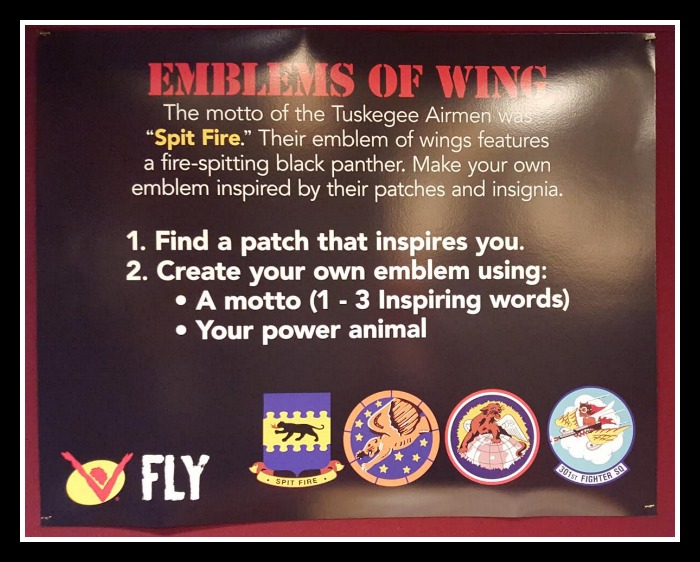 ~Upcoming performances will be shown at the following times:

FLY has a running time of 95 minutes with no intermission and is recommended for everyone ages 10 and up. Tickets for FLY at The New Victory Theater (209 West 42nd Street) are $10, $13, $18 or $25 for Members based on seat locations, with full price tickets starting at $15. Tickets are available online NewVictory.org and by telephone 646.223.3010. The New Victory Theater box office (209 West 42nd Street) will be open Sunday and Monday from 11am-5pm and Tuesday through Saturday from 12pm-7pm.

I am a mama living in the Hudson Valley of New York with my wonderful husband, two gorgeous children, and furry and finned pets. Aside from my family, my life revolves around FOOD–creating it, reading about it, sharing it, and eating it!! After getting a degree in Baking and Pastry Arts at The Culinary Institute of America, I realized cooking is really the area I love more, so I have taking part-time jobs as personal chef and culinary skills instructor. But even more than food, I love spending time with my family, whether it’s on the football field, baking cookies at home or going to mommy and me class. We adore traveling to see our relatives around the country, especially in Montana and Hawaii. I will make it to Europe one of these days, and I consider my only regret in life that I don’t have more stamps in my passport~