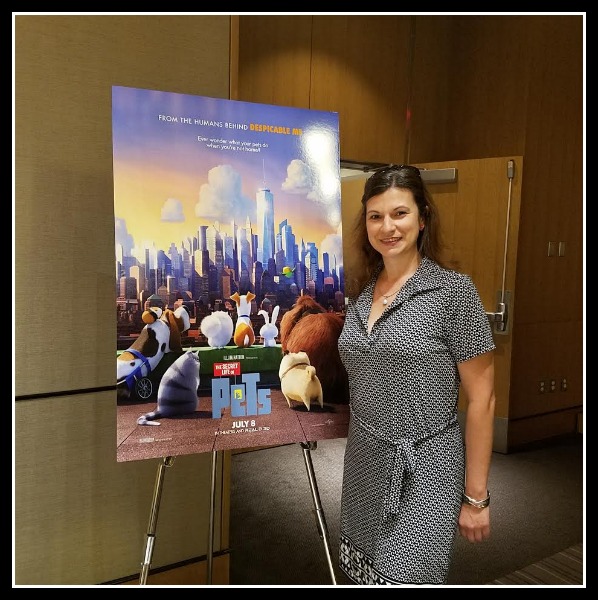 The Secret Life of Pets comes to theaters July 8, 2016

Illumination Entertainment and Universal Pictures presents The Secret Life of Pets, a comedy about the lives our pets lead after we leave for work or school each day! My family and I not only had an opportunity to preview the film, but I also interviewed cast members Kevin Hart, Eric Stonestreet and Lake Bell.

Take a Peek at the Trailer:

Comedy superstars Louis C.K., Eric Stonestreet and Kevin Hart make their animated feature-film debuts in
The Secret Life of Pets, which co-stars Jenny Slate, Ellie Kemper, Lake Bell, Dana Carvey, Hannibal Buress, Bobby Moynihan, Steve Coogan and Albert Brooks. Illumination founder and CEO Chris Meledandri and his longtime collaborator Janet Healy produce the film directed by Chris Renaud (DespicableMe, Despicable Me 2), co-directed by Yarrow Cheney and written by Cinco Paul &
Ken Daurio and Brian Lynch. www.thesecretlifeofpets.com
My boys love their pets so they had a blast viewing this film. The next day I was able to speak with some of the voice talent from The Secret Life of Pets. The one thing they all had in common was their love of rescue pets and animals in general. I walked out of the interview inspired to spread the word about rescuing pets and being a responsible pet owner. Here are some highlights from our talk: 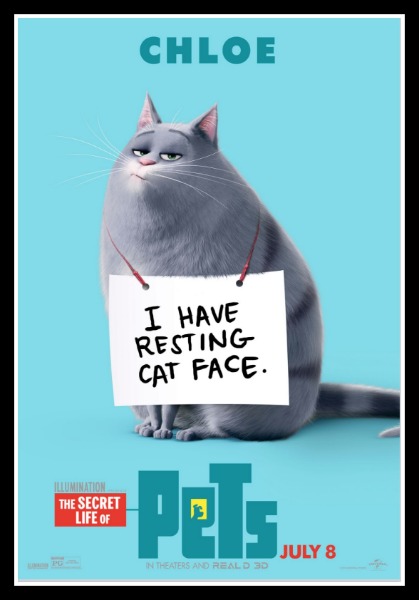 Lake Bell was full of energy and ready to speak about her role as Chloe the cat. She is a dog person at heart and talked to several friends that own cats about what the appeal is in owning a cat. The answer: they are complicated. She can relate to Chloe being complicated in many ways as Bell is a mom, writer, director and actor. (Now that’s complicated!) My favorite part of these interviews are when I get a glimpse of what the actor thinks about parenting. In Bell’s case she was passionate about being a mother and the struggles working mothers face. She touched on the guilt that most moms feel.

Bell: “I think that guilt is not helpful for you.

It’s not helpful for your children, and people around you. It’s like you have to kind of give yourself credit that it’s hard and that as long as you really mean well and you do your best and you’re true to yourself about the things that you need to do–like take care of yourself.”

As far as the films goes, Bell hopes that kids come away with a message about friendship and community. She is also a rescue pet owner and hopes that people can open up and talk to their children about how to be a responsible pet owner. 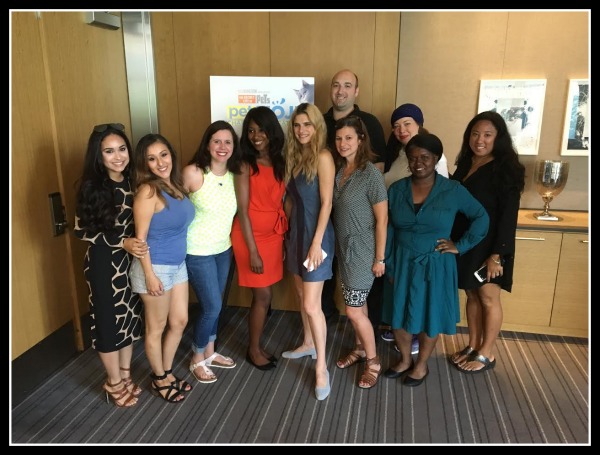 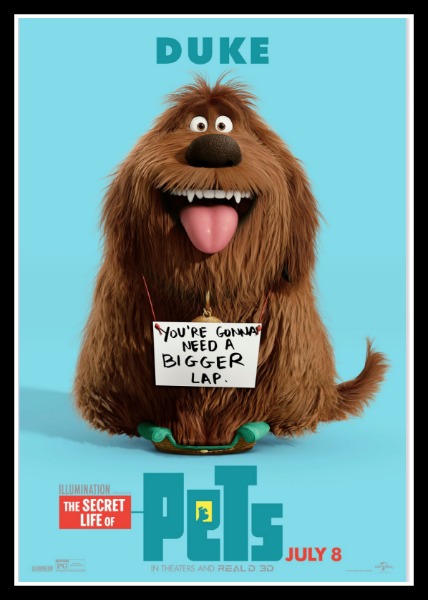 Modern Family’s Eric Stonestreet lends his voice to the adorable Duke. Duke is a rescued dog taken in by Max’s owner. Stonestreet is no stranger when it comes to animals. He grew up on a farm in Kansas and was surrounded by animals all of his life. Unfortunately, we learn that Stonestreet’s long-time pet dog Coleman had passed away this April. It had been hard on him losing his friend of 15 years. I asked Stonestreet about whether he had a chance to see an illustration of his character Duke and if that picture helped him voice the character.

“……….. Duke has looked the way he’s looked from the beginning, and I’m just lucky I got to blend the voice.

We messed around with what he would sound like in the beginning recording sessions. And since he is a Newfoundland mutt, we played with maybe a little north of the border accent up there, something.

But then, we decided a sort of heightened version of myself. I didn’t want make him like too New York. So, if you listen, when Duke gets angry a little of his New York comes out because he thinks that sounds tough.” 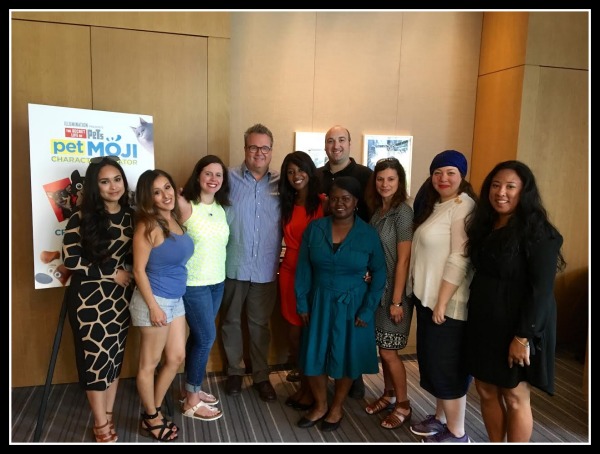 Stonestreet also concluded the interview with his wish that people go out and get rescue pets that they have room and time for them. He hopes to make room in his heart for a new dog in the Fall. 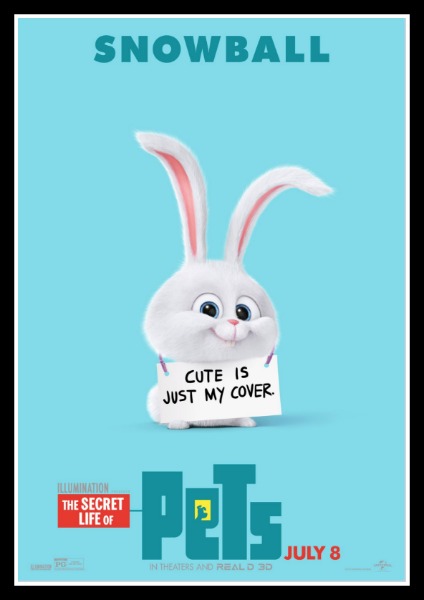 That’s right! Kevin plays Snowball. Don’t be fooled by his cuteness, he’s really a villain planning a revolution! ( The bunny, not Kevin!) Snowball had been hurt by humans so he’s against them. Hart feels his character is justified in his feelings. Hart elevated the character by not only making him angry because he was hurt, but showed us that he was insecure as well. You still fall in love with this villain because you know he’s a bully because he was abandoned. I was impressed with Kevin Hart. He is driven and inspiring. When asked if being in an animation movie was on his bucket list he answered with this:

Hart: “Yes. There’s not a door that I’m not going to open. It’s just a question of when I’m going to open it. I think the beauty of entertainment and where I am at a high level of success, you control what you want to do.”

He’ll also be lending his voice to a new animation feature “Captain Underpants!” I can’t wait! Kevin Hart is a dog man and his dog is very protective of his children. He has several, but he claims to be the “alpha male”. 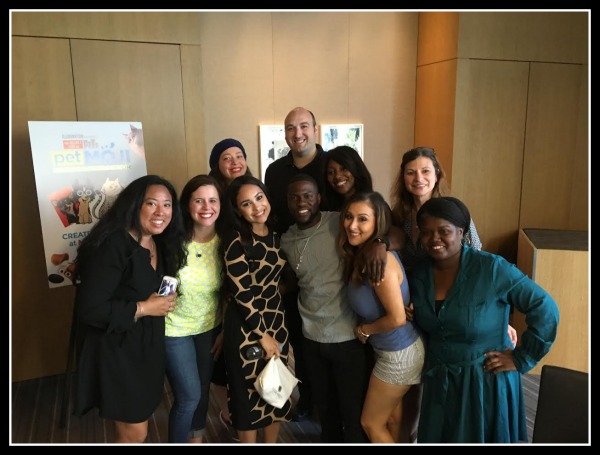 Get social with The Secret Life Of Pets:

Use the hashtag #TheSecretLifeOfPets when sharing with your friends! 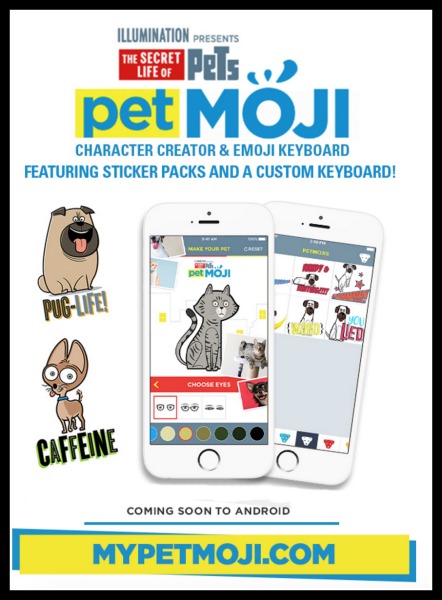 Download the new PetMOJI app to create an emoji of your favorite furry friend! Currently available on iOS, the app features sticker packs and a custom keyboard.

Customize your own PetMOJI avatar by selecting a dog or a cat, then choosing features for your pet: a body, a snout, eyes, ears, and a tail – plus patches, patterns, and colors.

Here is my cat Ritzy! 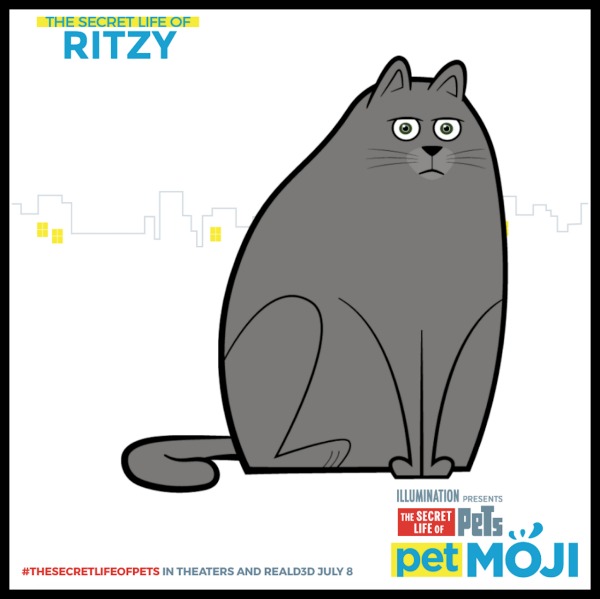 My family loved The Secret Life of Pets! Grab your family, your friends, and if you are going to the drive in- your pets too and go see it! July 8, 2016!

Disclosure: I was invited for a screening and interview by Universal Pictures. All thoughts belong to me and my family.