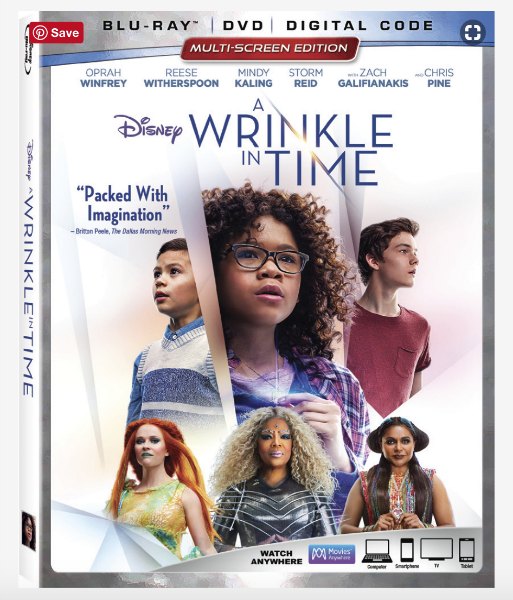 Disney’s “A Wrinkle in Time”

The Heart-felt, Inspirational Story of the Timeless Classic Comes Home

Now available to own on Digital HD, 4K Ultra HD and Movies Anywhere and  on Blu-ray™, 4K Ultra HD™, DVD and On-Demand.

Disney’s “A Wrinkle in Time,” from acclaimed director Ava DuVernay, is the perfect addition to your Disney movie collection! Personally, I have been known to stock up on the latest films before Summer and save them for those rainy days when the kids just don’t know what to do! This would be a wonderful surprise and pairing it up with the book-even better!

About A Wrinkle in Time:

As fantastical as the film’s premise and imagery may seem, “A Wrinkle in Time” centers on a universal human need that feels particularly relevant and relatable today. “This is a story about belonging,” says DuVernay. “It’s about a girl who just doesn’t feel strong in her mind, body and spirit. But through this epic journey, she finds her strength and learns that the center of the universe starts inside her. It’s about Meg feeling like she belongs in the universe and has a mighty part to play… as do we all.”

I have never read this book and both of my boys insist that I do after we watched the movie. My boys are avid readers so they are a tough crowd when it comes to movies made from books that they have read. We had mixed feelings about this production. While I love the messages that this movie promotes and the amazing cast I wasn’t blown away. The girls in my son’s class disagree with me. They loved the movie and read the book as well. My feelings are very mixed. The acting is spectacular. I guess I was expecting more, possibly in the effects department? I’m just not sure. I would still say that it is worth the watch as I wasn’t bored and did want to know what was going to happen next. (as a non-reader I had no idea where the story would go)

What are your thoughts on A Wrinkle in Time?