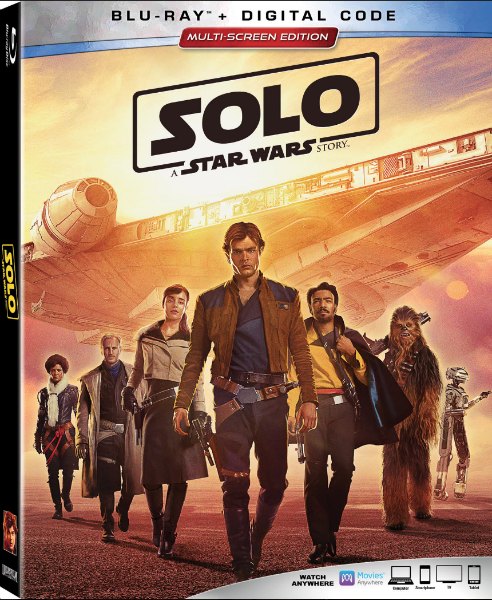 “Solo: A Star Wars Story” Arrives To Homes Digitally on Sept. 14 and on Blu-ray Sept. 25

I’m actually surprised to say that I liked it. I stopped writing this review to watch it again and liked it better the second time. I think I came into it the first with the mind-set that Harrison Ford cannot be replaced instead of thinking about it as a “young” Han Solo. Here is what I loved: First, we get to learn all sorts of things about Han, such as how he met Chewie, Why he is named Solo, and how he came to fly the Millennium Falcon. Alden Ehrenreich, as Han was a great choice. He played the character perfectly which I didn’t think would be possible. Woody Harrelson was outstanding as Beckett. ( Disclosure I just love Woody Harrelson-period!) I was however, not a big fan of Donald Glover as Lando Calrissian. The second time around I liked him a bit more, but I don’t know. Let’s just leave it at that. The storyline reminded me of a Sunday afternoon movie. It had just enough action, adventure, and storyline, but maybe could have used a little bit more. All and all a fine addition to the Star Wars series of films.

DIGITAL AND BLU-RAY BONUS MATERIAL (may vary by retailer):

Sit down with director Ron Howard and the stars for an intimate and entertaining discussion of the film’s making.

See what it takes to bring your favorite Wookiee to life in this lighthearted look behind the scenes.

Get behind the wheel for the making of this high-octane chase through the streets of Corellia.

Explore the challenges and thrills of creating this action-packed sequence, including its remote location and spectacular effects.

Meet the newest droid—and the talented actor who helps bring her to life.

Take an in-depth tour of the rough-and-tumble bar where strangers mix and gamblers risk all in the legendary card game, Sabaac.

Join Han and Chewie at the controls of the Millennium Falcon to see how this legendary moment in Star Wars history unfolds.

o   The Battle of Mimban: Extended

Who would you like to see have their own film?