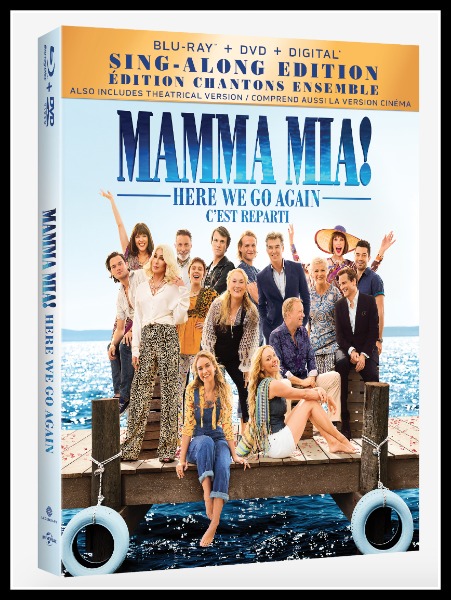 So, I don’t know anyone that doesn’t love Mamma Mia! The people wanted more and we got it in Mamma Mia! Here We Go Again! Did you miss it in theaters? Well, let me tell you about it!

Both a prequel and a sequel, the film tells two stories: present day as Sophie Sheridan (Seyfried) prepares for the grand reopening of her mother Donna’s (Streep) hotel and 1979 when young Donna (James) first arrives on the island. Sophie learns about her mother’s exciting, fun-filled adventures with the young Dynamos, Tanya (Jessica Keenan-Wynn) and Rosie (Alexa Davies), and how young Donna first met her three possible dads Harry (Hugh Skinner), Bill (Josh Dylan) and Sam (Jeremy Irvine) all those years ago.

Get ready to sing and dance all over again with the entire cast and go behind the scenes with MAMMA MIA! HERE WE GO AGAINon Digital, 4K Ultra HD, Blu-rayTM and DVD – with over an hour of bonus features including one- of-a-kind lyric videos and a never-before-seen performance of “I Wonder.”

Well, my family and I had a Mamma Mia a-thon! We started by watching the original Mamma Mia! then followed up Here We Go Again. The fun continues in the prequel/sequel just like it does in the first film. You find your self singing along and swept away by a young Donna’s adventures. Lilly James does an amazing job in this part and truly embodies Meryl Streep’s Donna as a young woman. I loved finding out Donna’s story and she landed in Greece and chose to stay. It was fun to see the original cast return with their younger counter parts. It is a bit more somber than the first, but still leaves you with a smile on your face and some tears. Let’s just say I’m not the only one that cried at the end. My family and I are still debating whether or not it is as good as the first one, but I find that it stands on it’s own just fine. Pick up your copy today and have a fun movie night! This edition is a sing-along so it makes it easy!

The Giveaway: OVER: Congrats to Robin!