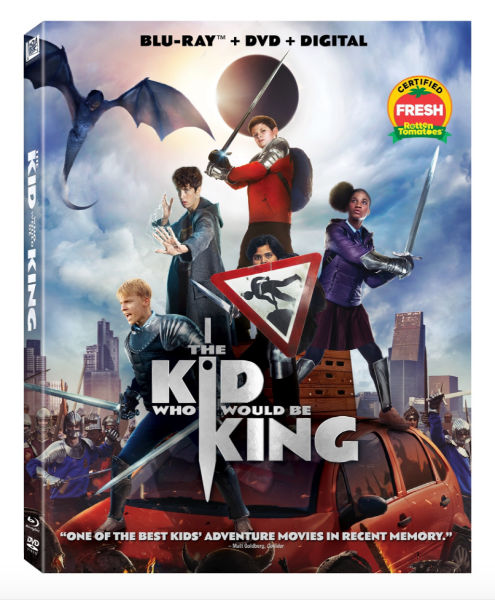 This movie fell right in line with what my son enjoys watching! We had a wonderful movie night checking out this old story turned modern movie!

About The Kid Who Would Be King:

Old school magic meets the modern world in the epic family-friendly adventure, The Kid Who Would Be King. Alex thinks he’s just another nobody, getting bullied at school and told what to do by his teachers, until he stumbles upon the mythical Sword in the Stone, Excalibur. Now, with the help of the legendary wizard Merlin, he must unite his friends and school yard enemies into an allied band of knights to defeat the wicked enchantress Morgana. With the future at stake, Alex must become the great leader he never dreamed he could be and save the world.

I watched this on movie night with my 13 year-old son. It was a new modern and clever take on the King Arthur legend. We both enjoyed the young version of Merlin and his crazy antics during the film. I also liked how Merlin introduced “The Chivalric Code”.  Merlin gives our young heroes a passionate speech about the importance of upholding the Chivalric Code during their quest to save the world, and as the kids begin to take it seriously they realize its value.  Priceless!

The new adventure takes place in London with a bunch of middle school children. As with any kids movie, lessons are learned along the way. One of my favorite parts is when the bullies actually start working with the good kids to fight evil. My son liked the fact that the costumes of armor the school children wear aren’t over top, but more realistic to what kids would be able to produce. Now the downside: We both thought it went on a bit too long. I thought it was over and then it just kept going on! Overall though, a fun movie for both boys and girls. If you are looking for something to watch over this Spring Break with the kids The Kid Who Would Be King is a good choice!

THE KID WHO WOULD BE KING Special Features

One of the coolest things in the film is when Merlin performs the intricate hand gestures required to summon his magical powers, and there are some really cool tutorial videos in the bonus content that show viewers how to pull off the spells.

#MovesLikeMerlin – Would LOVE to have kids and parents alike share videos on Instagram of themselves attempting the magical hand sequences, and then tagging the film and using the custom hashtag #MovesLikeMerlin

What do you love to do on movie night?