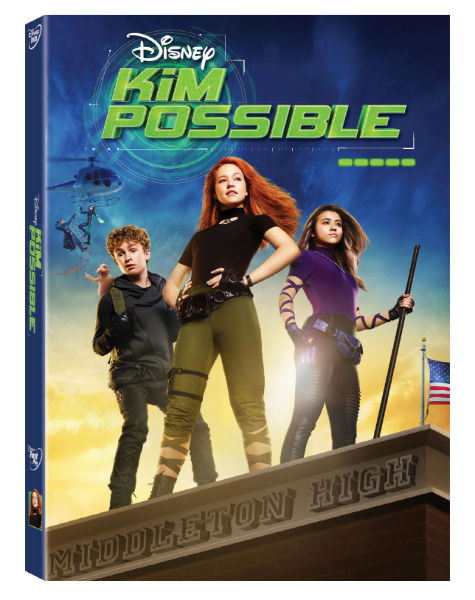 From the Studio That Brought You Teen Beach and Descendants!

I have heard of Disney’s Kim Possible, but I had never seen the series. It was fun to have the opportunity to watch this live-action film and meet the characters.

Based on the global hit animated series, the live-action Disney Channel Original Movie follows everyday teen hero Kim Possible and best friend and sidekick Ron Stoppable as they embark on their freshman year of high school, all while saving the world from evil villains. By their side every step of the way is teen tech-genius Wade and new friend Athena, who also happens to be a super fan and is eager to join Team Possible. While Kim and Ron have always been one step ahead of their opponents, navigating the social hierarchy of high school is more challenging than the action-hero ever imagined. With Drakken and Shego lurking in the wings, Kim must rely on her family and friends more than ever. Now it’s up to Team Possible—Kim, Ron, tech-genius Wade, new friend Athena and Rufus, a naked mole-rat that Ron meets along the way—to stop these super villains.

My son and I watched this together and neither of us had seen the animated series so we were coming in fresh. My son had low expectations as the movie is rated G, but he ended up liking the film. I feel I would have loved this movie if it was around when I was a kid. Kim is smart and basically a super hero, but she still has the normal insecurities of any teen girl. I actually enjoyed her adventure in the movie. The G rated makes it the perfect film to play for kids of all ages without having to worry about language, etc. It also has enough action to keep older children interested and not bored. My son (13) did figure out the plot twist early, but it still didn’t keep him from not wanting to watch it play out. Truly a fun movie for the familyto enjoy.

So, what’s the sitch? Save the world like Kim Possible in a cool, new Kim Possible Pendant Necklace! Make it yourself while you watch the Live-Action Kim Possible movie on DVD today!