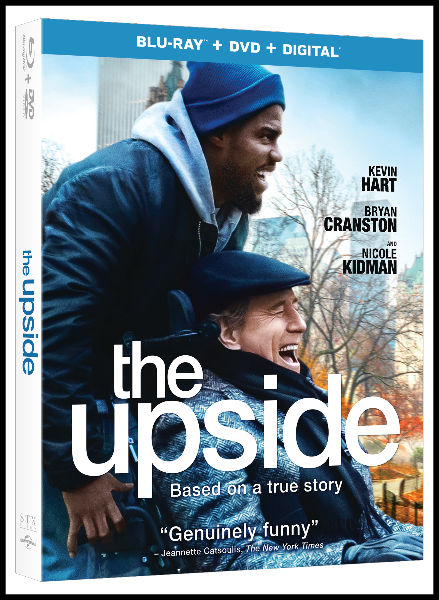 AVAILABLE ON DIGITAL, BLU-RAY™ AND DVD

Inspired by a true story:

Recently paroled ex-convict, Dell Scott (Kevin Hart) strikes up an unusual and unlikely friendship with a quadriplegic billionaire, Phillip Lacasse (Bryan Cranston) in this hilarious and heartfelt comedy. From worlds apart, Dell and Phillip form an unlikely bond, bridging their differences and gaining invaluable wisdom in the process, giving each man a renewed sense of passion for all of life’s possibilities.

This movie not only surprised me, but my family as well. Honestly, I wasn’t expecting much and neither was my family. We all loved it and found ourselves rooting for the characters. It is an extraordinary story that surprised me. Both Hart and Cranston really brought it with their performances. Sad, funny, and unexpected all rolled up into one film. My children are 15 and 13 and both were entertained. ( and surprised) I had no idea that is was adapted from the 2012 French film Les Intouchables. It is PG-13 for drug use and some suggestive content. I say put it on your list of must watch films and you’ll get to see a different side to Kevin Hart!

The Upside will be available on Blu-ray™, DVD and Digital.

Disclosure: I received a copy of this film for review purposes. All thoughts belong to me and have not been influenced.