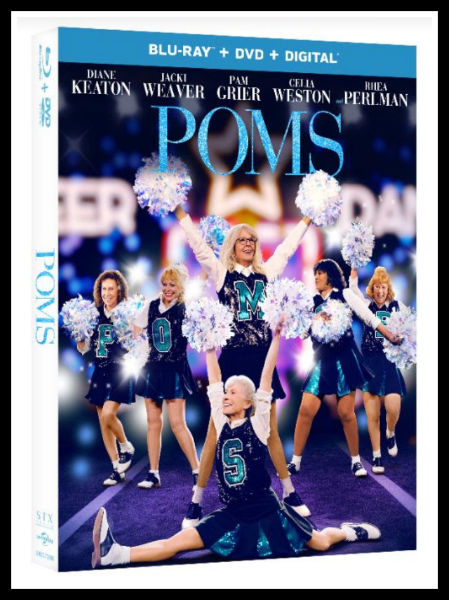 DIANE KEATON AND JACKI WEAVER LEAD A STAR-STUDDED ENSEMBLE CAST IN THE HEARTWARMING COMEDY  POMS now available to own!

From STXFilms and Universal Pictures Home Entertainment: Starring Academy Award®winner Diane Keaton (Book Club) and Academy Award® nominee Jacki Weaver (Silver Linings Playbook), the film follows a woman who revisits her passion for cheerleading, inspiring those around her to live life to the fullest. Full of humorous and empowering moments, POMS is an endearing comedy that will inspire audiences of all ages and have everyone cheering.

POMS is an uplifting comedy about a woman who forms a cheerleading squad at a retirement community. With an all-star ensemble cast led by Keaton and Weaver, the film features film icons Pam Grier (Larry Crowne), Celia Weston (The Intern), and Rhea Perlman (Sing) as the group of women who are determined to defy stereotypes while having the time of their lives.

Well, I’m feeling a bit mixed and so is my family. First of all, I had no idea (SPOILER) that the main character has cancer and when she made the choice to move to the retirement home “to die” she meant it literally. I was excited about watching a movie with older woman and having a good laugh. I laughed and cried. It certainly was not what I expected and even though there were plenty of laughs, I still had expected more from this cast and crew. Yes, the story does prove that it is never too late to follow your dreams, but the script fell a bit flat for me. The actors are all amazing in their portrayal of the characters, although the script was lacking in depth. Would I watch it again? Yes. Did I cry? Yes. Truth be told, I wanted to laugh more and wasn’t ready for the heartache. I will give it another chance. If the opportunity arises take a chance and watch it. Let me know what you think!