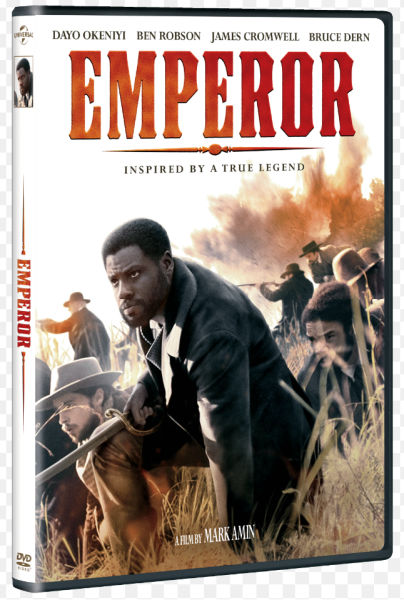 A captivating and emotional story of courage, EMPEROR is based on the iconic American freedom fighter and legend Shields “Emperor” Green (Dayo Okeniyi, Terminator Genisys, “Shades of Blue”) a descendant of African kings turned outlaw slave. The film tells the astonishing tale of Green’s escape from slavery and his transformation into one of America’s greatest heroes. Seeking freedom for his family, Shields Green fights his way north, joining the daring raid on Harper’s Ferry, the key battle of the abolitionist movement which helped spark the beginning of the Civil War and alter the course of American history.

Wow, I had never heard of Shields Green before this film. If I did learn about him I might have forgotten. After seeing this movie I was drawn to research about the real Shields Green, and I found that this is name that deserves to be remembered. What a story! Although the movie is only inspired by actual events, I feel t gives the audience the opportunity to get to learn a piece about history that we might not have been taught. Right off the bat they tell you this is a movie from a black mans point of view. I was intrigued because I never thought about it from that perspective. The movie was inspiring and it also gave me plenty to think about given the current situation of our times. The acting was superb. Although there are some scenes of violence, they are mild and being rated PG-13 I would find it comfortable to watch as a family and discuss issues in our world today. This is a must see film. Still not convinced? Take a moment and look up Shields Green, I”m sure you will want to learn more about him and the men he fought with during this time.