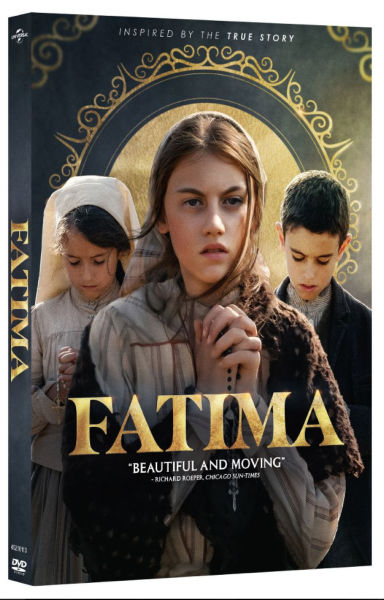 In 1917, outside the parish of Fátima, Portugal, a 10-year-old girl and her two younger cousins witness multiple visitations of the Virgin Mary, who tells them that only prayer and suffering will bring an end to WWI. Word of the sighting spreads across the country, inspiring religious pilgrims to flock to the site in hopes of witnessing a miracle. Inspired by real-life events and starring Goran Višnji? (Beginners), Joaquim de Almeida (“Queen of the South”), Stephanie Gil (Terminator: Dark Fate), Lúcia Moniz (Love, Actually), with Golden Globe® nominee Sônia Braga (Aquarius) and Academy Award® nominee Harvey Keitel (The Piano), FATIMA has been hailed by critics as “beautiful and moving,” (Richard Roeper, Chicago Sun Times) and is an uplifting story about the power of faith.

Growing up Catholic, I have always been fascinated with the story of Fatima and other sightings of Mary. This story is simple, but the emotions of the children are conveyed in an artful way. The audience has a glimpse of what the children might have been feeling and what the families had possibly gone through during this time. While not overly dramatic, it is a nice movie to share with family and grow your faith. Faith is something we need these days and this film can be an inspiration for some. The extras included in the DVD and digital are worth the watch. Andrea Bocelli performs an original song and speaks about what inspired him to be involved in this production.

BONUS FEATURES on DVD AND DIGITAL: