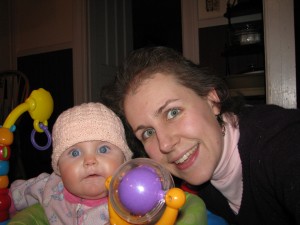 Janelle and her 8 month old daughter

My First Pregnancy and Birth Story

A few months after our wedding, I found out that I was pregnant. I was 18 years old. I was young and did not know anything about babies, pregnancy or giving birth.  I started to do a lot of reading and learned about my different options from hospital birth with a doctor, to a home birth with a midwife.  The more I read about home births, the more it sounded like what I wanted.  I had this great fear of IV’s and needles and figured that if I was at home, they couldn’t give me an IV. The one complication with a home birth was that there was no midwife within two hours of our home.  This being my first pregnancy, we decided that driving two hours to Vermont to our midwife would work.

Other than feeling exhausted and nauseous the first twenty weeks, everything went along as expected.  Then around twenty one or twenty two weeks, I started having major Braxton-Hicks contractions, five minutes apart for hours at a time.  I immediately called my midwife to inform her about what was going on. She immediately put my on limited activity and told me to drink a lot of water. At twenty four weeks, I went over for a regular appointment and found out that I was not dilating with the Braxton-Hick contractions and was allowed to go back to normal activities. I still was feeling tired and crappy and had zero energy. My midwife encouraged me to let her take blood and she would check my numbers.  I reluctantly agreed but hoped that maybe there was something I could do to make me feel more like myself.  The next day when my midwife called, I found out that I was very anemic. In fact, she had never seen someone so low!  I immediately started to take an iron supplement and that helped my energy level tremendously.

The rest of the pregnancy was uneventful. Everyone had advice for a first time mom but it was not always good advice.  People always told me that I could eat whatever I wanted matter since I would lose it all as soon as the baby was born.  So, I did exactly that. I didn’t eat healthy and ate everything in site.  I began to gain a LOT of weight. By 38 weeks, I had gained over 50lbs. I looked and felt horrible. I just couldn’t wait for my baby to be born.  My due date was November 30, 2002.  I began to experience pretty severe swelling with increased blood pressure around 38 weeks.  My midwife was concerned, but I did not want to be induced and have a hospital birth.  So we just waited.  Seven days after my due date and around 11pm, I started to experience very painful and regular contractions.  I immediately called my midwife and started our drive over to Vermont.  It was exciting to know that my pregnancy was finally coming to an end.  As we drove through Whitehall, NY, we suddenly noticed flashing lights in our mirrors.  My husband wasn’t speeding but it was late at night and we had just noticed that one of our headlights had gone out.  When the officer approached our car and asked my husband if he knew why we were getting pulled over, my husband mentioned the headlight.  Sure enough, that is why he had pulled us over.  As we were handing him the license and registration for our car, he asked us where we were going. When my husband told him that I was in labor, I thought the officer was going to have a heart attack!  He repeatedly asked me if I was ok and said that he would call an ambulance for me.  I said no and that I was fine. I was just heading over to Vermont to have a home birth. The officer handed back our papers without running a check on them and just said to go and to make sure that we fixed the headlight the next day.  Let me tell you, the look of terror and shock on that poor man’s face when he found out I was in labor was unforgettable!

We finally made it to the home where we were staying and my labor just stopped!  I was so disappointed.  It was also 3 o’clock in the morning so we just stayed at this family’s home for the night. The next day,  my midwife stopped by to check on me and absolutely nothing had changed. I wasn’t dilated or anything.  We stayed for one more day expecting something to happen but nothing did so we headed back home, nine days over due.  My blood pressure was still dangerously high and the swelling was horrible. I had gained 60lbs.  My midwife said that I was going to have to be induced if nothing happened soon since I was definitely pre-eclamptic and she was afraid I was going to have a stroke.

The next morning, I woke up around 5am and my water broke. Finally!  Back to Vermont we went. This time nothing eventful happened.  Labor continued to progress slowly throughout the day.  I had to drink a mix of calcium and magnesium to try to keep my blood pressure down.  Around 8pm, my midwife suggested that I start to push.  I was exhausted from the last couple of nights and a full day of labor.  I looked at my mom and just said, “I can’t do this any more”.  I pushed for a little over am hour. My daughter was born at 9:36pm on December 10, 2002.  She weight 6lbs 14 oz.  I had no medications for my labor.  Despite my midwife’s best efforts, I did need two stitches. My daughter was beautiful and I was thrilled that it was finally over. We left for home the next day.

My daughter did not nurse well and with me being a first time mom, I had no idea how to help her.  I ended up pumping and feeding her that way.  However, she was still dehydrated and when she was four days old, she was diagnosed with polycythemia, a condition of having too many red blood cells, making it almost impossible for the blood to circulate.  We didn’t find this out until she had stopped breathing at home and we had had to call an ambulance.  When the MD spoke with us after her diagnosis, he said that if we had waited even one more hour, she would have died.  The NICU at Albany Medical Center had to perform a fluid transfer. My daughter was released four days later, completely healed.

I continued to attempt to breast feed her without much success. When she was ten days old, she finally latched on.  She was a champ after that and nursed for 6 straight months.  My daughter is now 9.5 years old and is thriving.  Despite the challenges that I had with my first pregnancy, I would not have changed it.  I loved the home birth and the environment it provided. 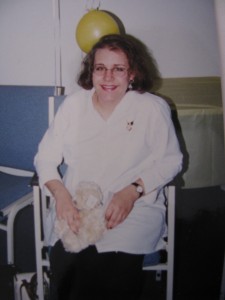 I am a 29 year old, SAHM of four children. I home-school my children, love to garden and cook with whole foods, volunteer as an EMT with our local emergency squad, and accompany our church with congregational singing.

My blog is a collection of money saving tips, whole food recipes, gardening, sewing, knitting and more.  I started Financially Free 4 Ever four years ago after many people asked me how we managed to live on $20,000 or less.  My husband owns his own musical instrument business. Together, we have an Ebay store, Upstate Oddities and I help people start up their own Watkins home business. We live in a small town in Upstate New York.