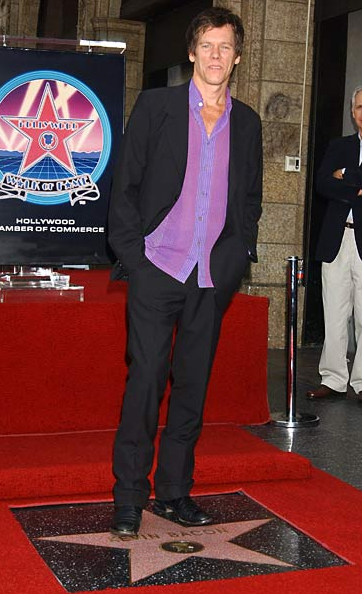 Don’t tell me that you’ve never had the Kevin Bacon conversation with anyone! You know the game where you try to connect another actor somehow through Kevin Bacon. I had forgotten all about this game until The Husband and I watched Footloose the other night. ( By the way, love that movie and I love Kevin Bacon!) Just a side note, the husband and I had a few drinks before this discussion and this is how I remember it best! Here is what our conversation sounded like:

Watching the credit role of Footloose:

M: I love this movie. Remember a few years ago when Kevin Bacon was on Will and Grace and he made fun of himself in this film?

TH: Yeah, that was funny. It’s cool that he can laugh at himself.

M: Yeah, cool. I laughed so hard. Hey, did you ever play that Kevin Bacon game?

TH: What game? Oh, wait the one where you name his movies and stuff?

M: Yeah, you want to play? Wait! I can’t remember how to play. Do you name an actor or a movie?

TH: It has to be within 6 degrees. You need to connect him in 6 ways.

M: No, I don’t think it has to be six. Do you think he knows people play this game?

TH: Of course he knows! He’s Kevin Bacon! Everyone plays this game, but I guess you can play it with any actor. Let’s say John Travolta.

M: Okay, so John Travolta was in Broken Arrow with Christian Slater who was in that prison movie with Kevin Bacon.

M: The one where Kevin Bacon was a prisoner and Christian Slater was his lawyer. Crap, I can’t remember the name, but it was a good movie. Very sad.

TH: I think you are thinking of somebody else.

M: Okay, you think of someone.

TH: This is hard.

M: Yeah, it is. I’m stuck and he’s been like in a million films. How do you play this game anyway? I should post something on Facebook.

TH: We should memorize all of Kevin Bacon’s movies and then ask someone to play with us. We’ll look so smart. ( We both giggle)

M: Yes we would. What the hell is the name of that movie? Oh well, Are you ready for bed.

So, the name of the movie is Murder in the First! If you haven’t seen it you should, but be prepared to be sad. Anyway here is the link for the Wikipedia and the game: Six Degrees of Kevin Bacon. My husband is right, he does know about it! LOL! Oh and by the way, the game began after three students finished watching Footloose! There must be some sort of subliminal message in there!