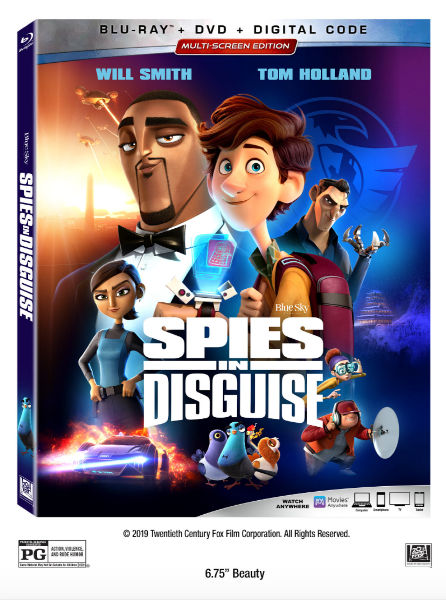 Join Will Smith and Tom Holland on the mission of a lifetime. Bring home the adventure on Digital, Blu-ray™, and 4K Ultra HD™!

It was a breathe of fresh air considering the current situation to have a laugh with my family! Once again my teens thought they were too old to enjoy this film, but they actually liked it! (And so did I!)

About Spies in Disguise:

In this high-flying animated comedy, super spy Lance Sterling (Will Smith) and scientist Walter Beckett (Tom Holland) are almost exact opposites. Lance is smooth, suave and debonair. Walter is none of the above. But this unlikely duo must team up for the ultimate mission to save the world when a “biodynamic concealment” experiment transforms Lance into a brave, fierce, majestic…pigeon!

Experience the hilarious thrills of SPIES IN DISGUISE, which is Certified-Fresh on Rotten Tomatoes™, from the comfort of your own home, along with Blu-rayTMbonus features including multiple making-of featurettes and two awesome music videos. Additionally, the Blu-rayTMeditionofSPIES IN DISGUISEincludes “Super Secret Spy Mode,” an immersive, in-movie experience that takes you deeper into the story with Easter eggs, fun facts, and behind-the-scenes insights into the making of the film.

First of all, I love Will Smith as the voice of Lance Sterling! The animation truly captures Smith, even when he is a pigeon! Plus you have Tom Holland as a wacky scientist and more to this amazing cast of voice talents. Since I have teenagers I wasn’t sure how this would go over with them, but I am a lover of animation so I had to try. I think my 16 year-old and I laughed the most. The film is rated PG for action violence and rude humor. I was surprised at some of the “rude humor”, but honestly I think it would just fly over younger kids heads. I have teens so they picked up on it, which I think actually made it fun for them as well. The story is fresh and fun. Oh, and did I mention funny? This is a film that the entire family can enjoy. So, if you are stuck at home and tired of the same old thing playing give it a try! We loved it!

*Available on Digital Only