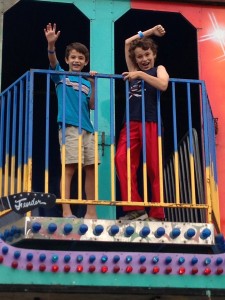 Before you go and get all excited, NO this isn’t a me getting drunk story. Sorry to disappoint you. It’s about my son, me and parenting. Let me begin…..

Yes, the County Fair ended last weekend. When I was a child I remembered I looked forward to going on every ride and dreamed someday about going on “the big people” rides. Then I got older and went to the fair with my girlfriends hoping we’d run into that special someone we had a crush on, or go on a ride just to get close to that someone. Now as a parent, I do my duty and take my kids. I make pretend to enjoy the animal smell and ignore the tweens wearing shorts that are so short they could be mistaken as underwear. I do however still enjoy the rides. Maybe a bit too much this year. We ran from ride to ride this year until finally my son vomited on one. I was sitting next to him praying that it wouldn’t hit me. ( I know, I know, I’m his mom, but that doesn’t mean I want to be covered in vomit. Been there and done that.) As I’m waving to the ride operator to stop he keeps asking, “How much vomit is there?” “Is it alot?” Seriously? My kid is green and you want to know how much? As we get off the ride he begins telling people to get back that the ride is closed, he grabs a bucket and storms off. I guess handing us some paper towels would be too much to ask. I resist my urge to call him an unsympathetic douchebag because I’m with my kids. My mother-in-law runs to get him a drink and papertowels. I begin searching the booths for someone selling shorts or pants. I try calling my friend whom I suspect is at the Fair with a change of clothes, but I get no response. When I return his pants have been wiped down, he’s sad and wants to go home. My other son continues going up and down the big slide as we stand around staring at my oldest wondering what to do. He holds me and asks me to bring him home.

I leave the rest of my family there and as I”m holding him up walking through the parking lot I realize that I have no idea where we parked. I start pushing all the buttons on my remote hoping something sets something off and I can find it. I didn’t drive there so I wasn’t paying attention. Finally, I see the lights flash and I get my boy in. Then part two of the nightmare began, he didn’t want the windows open only the AC on. The car smelled like vomit and he screamed the entire ride home that his stomach hurt. We got home. I stripped him down and brushed his teeth. He was shaking. I wrapped him in a sleeping bag and had him lay down on the couch while I held his drink so he could sip on it. Then as I sat on the floor it came to me.

Sometimes the biggest job that you have as a mom is to just sit back and hold your child while the rest of the world moves on. You are actually holding one persons world together.

In that moment I came to the realization at how much I have grown as a parent. I didn’t freakout that I just spent all this money on the Fair and had to go home. I wasn’t angry because I missed watching my other son enjoy his day. I didn’t care that people were staring at us. My only focus was on him. I felt peaceful. Then it hit me, this was a moment. I think we all believe that every “moment” is suppose to be a special one. This is a moment that I will remember not because it was a happy one, but because I was able to comfort my son without any negative thoughts getting in my way. I feel as if I have unlocked some sort of secret that I always knew existed, but had been beyond my reach. As I sat on the floor having my “Ah!” moment I began to wonder if this meant the end of going to amusement parks for my son. He rarely gives anything or anyone a second chance. Just as I had that thought a commercial came on TV for a popular park and as they strapped the people in on the roller coaster my son said, “I want to go on that someday.” I was relieved for today he did a little bit of growing up himself.

Who knew that a sometimes it takes a little bit of vomit to change someones perception about their world? Has a bad situation ever turned out good for you?