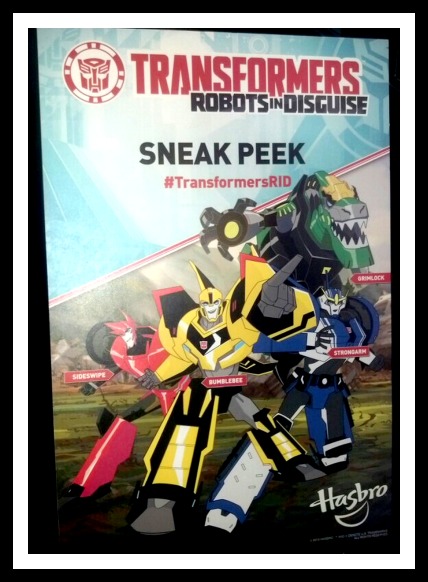 “Thanks to Hasbro and Hunter PR Be Your Best Mom was invited to attend a sneak peek of the new Transformers Robots in Disguise in NYC. Contributing writer Marcia Kellogg and her son attended the event on Saturday March 7th. All guests received gift bags, All thoughts in this article belong to the author.”

My son and I had the opportunity on Saturday to view and explore the new realm of Transformers: Robots in Disguise. Hasbro is rolling out a multimedia line to expand the Autobots’ world. We were able to see the first two episodes of the new show on the big screen. We had a great time playing with the character figures for multiple ages, and we visited interactive stations to check out the new App and “travel” to Cybertron as our favorite characters. We even got to race Autobots and bring some figures home! 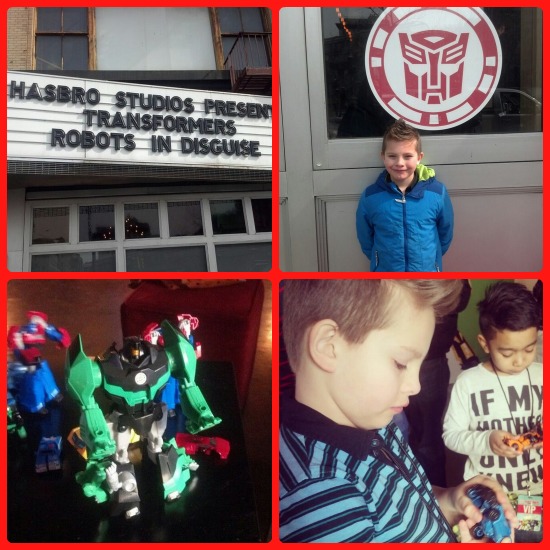 The new animated series finds Bumblebee training Autobot law informant cadet Strongarm on the planet Cybertron. Bumblebee receives a message seemingly from beyond the grave from Optimus Prime. There’s trouble on Earth, and Optimus is sending Bumblebee on a mission. Joined by Strongarm and trouble-making punk Sideswipe, Bumbleebee returns to Earth and meets ups with human father-son allies Denny and Rusty (Russell!) to assist Minibot Fixit in tracking and recapturing escaped Decepticon criminals. C was excited to see a Dinobot take the screen as a new member of Bumblebee’s squad. The rough and tumble, and silly, giant Grimlock is a lighthearted heavy-hitter to balance Bumblebee’s fierce passion. Personally, I cheered for Strongarm; the cadet is all business and bravery and a great female character that both boys and girls will love. Like the live action films and the previous story line of the animated series Transformers Prime, Transformers: Robots in Disguise promises to deliver high intensity thrills, new characters to cheer for and to despise, and many laughs along the way. The one-hour special debut will air on Cartoon Network March 14th at 6pm.

C has been a Transformers fan for about four years since receiving a Bumblebee figure following the release of the live action films. Hasbro’s new line for the show features figures of varying complexities, which is great for both of us. He can transform the more difficult toys quicker than I can, so I especially appreciate the One Step bots. Sideswipe and Fixit were my favorites, and they are definitely on level for younger kids (and impatient parents). C really enjoyed the racing station with these guys as well as Bumblebee and Steeljaw. They convert in an instant. I think they are the perfect way to start out on Transformers, and they are fun little guys for seasoned fans as well. Grimlock and Optimus 3-step changers were C’s favorites from the event. While listed as just age 6+ instead of 5+ like the 1-step figures, these bots have quite a few more advanced pieces and conversions. He was able to convert both without help, and they look great as robots and cars. The only drawback I saw at this level was that Grimlock’s tail is not part of his vehicle mode, and I see that getting lost at our house. The Legion class characters are small in size and have easy conversions, but the detail is great. Sideswipe was my favorite here as well. The most advanced figures we played with belong to the Warrior class. These toys are for the more seasoned converting fans, especially Drift. Hasbro has also released a two lines of non-transforming figures for those who just love the robot characters. This Titan Hero class of 12-inch robots is great for ages 4+. Also available are the mystery packs of Tiny Titan rubber figurines. 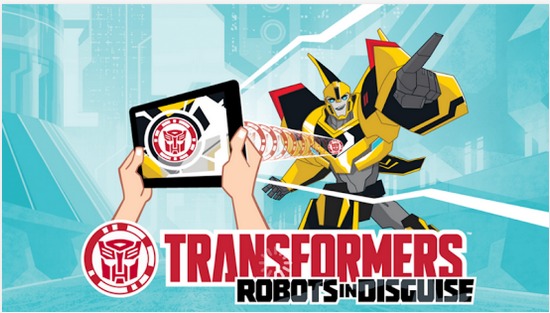 This station actually started before we even got to the event. The Transformers: Robots in Disguise app is available for free on iOS and Android devices. After a quick search and download, C got started battling Decepticons in the Scrap Yard, and built up his characters’ strength, weapons, and moves. While attending the Sneak Peek, we used his tablet with the app on it to scan in various characters we were playing with. After scanning the special Autobot or Decepticon code with your device’s camera, you will be able to use your toy and weapons in the game! After we got into just the right lighting–not to bright, not too dark–scanning was a breeze. The app is age appropriate for school-age and up children. Although the robots are fighting each other, it is pretty tame violence–no oil sprays or pieces flying off. 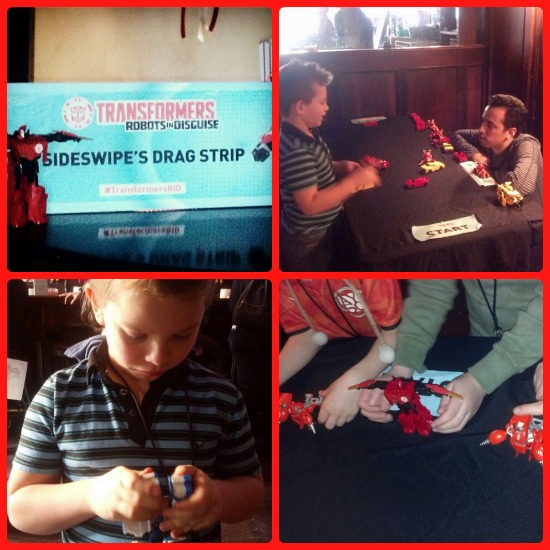 We had a fabulous afternoon together! Hasbro and the event staff were wonderful to us and all of the Sneak Peek VIP guests. C especially like Vincent at the racing table for helping him learn the best way to do quick conversions. My boy who really doesn’t love having his picture taken was chomping at the bit to don a mask and hop in front of the green screen to join Bumblebee on Cybertron. We made quick stops at the coloring and Decepticon detection stations, and did some battling at the app station which was projected onto a big screen. The sneak peek really got us excited for a new journey with the Autobots. I know my son will have hours of creative and imaginative play with the Grimlock, Optimus, Fixit, and Bumblebee figures we were able to bring home! 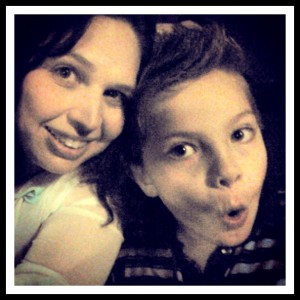 I am a mama living in the Hudson Valley of New York with my wonderful husband, two gorgeous children, and furry and finned pets. Aside from my family, my life revolves around FOOD–creating it, reading about it, sharing it, and eating it!! After getting a degree in Baking and Pastry Arts at The Culinary Institute of America, I realized cooking is really the area I love more, so I have taking part-time jobs as personal chef and culinary skills instructor. But even more than food, I love spending time with my family, whether it’s on the football field, baking cookies at home or going to mommy and me class. We adore traveling to see our relatives around the country, especially in Montana and Hawaii. I will make it to Europe one of these days, and I consider my only regret in life that I don’t have more stamps in my passport~