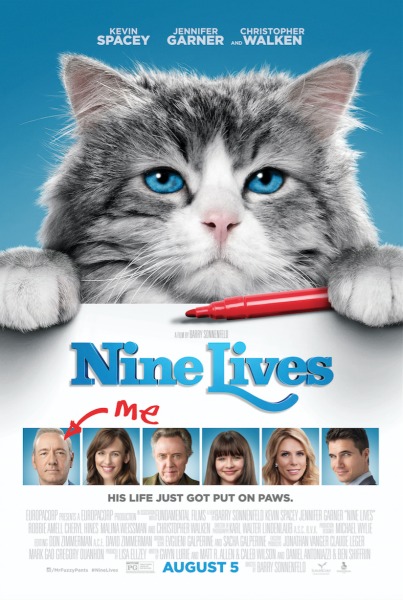 On Wednesday my boys and I were able to catch a screening of Nine Lives and interview one of its stars Cheryl Hines. My kids had been dying to see this film as we are big cat people! Personally I can never get enough of Kevin Spacey or Christopher Walken, but really who can? Emmy Nominated actress and HBO’s Curb Your Enthusiasm star Cheryl Hines caught up with us after the film and took a few of our questions. 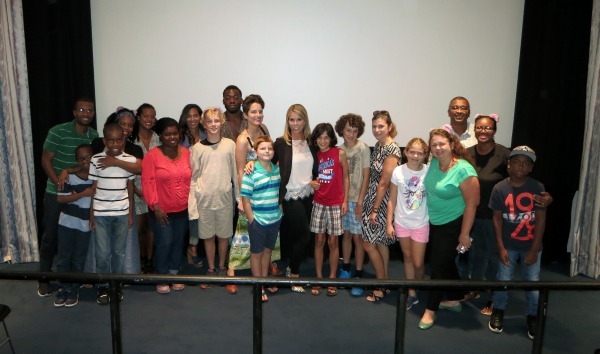 Here are a few snippets from the interview. I asked her the question that I always want to know when people work with animals.

Milena Barrett: Are you a cat or a dog person?

Ms. Cheryl Hines: Well, when I was growing up, we had lots of cats. At some point, I think we have 17 cats.

Ms. Cheryl Hines: They were outdoor cats. But, now I’m a dog person because some of my kids are allergic to cats, so no choice.

Another blogger asked a really important question as a mom, considering that Cheryl’s characters daughter is a mean girl.

Blogger: Your daughter in the movie is a mean girl. So–.

Ms. Cheryl Hines: –She is a mean girl. Where does she get it from–?

Ms. Cheryl Hines: In real life? Well, you know, with my daughter, I have a daughter who’s 12. First of all, that would never happen in real life at my house because I think it’s important to talk to your kids and always ask how would you feel? I’m always telling my daughter, if there’s a new kid coming to school, your job is to introduce yourself to that kid, make sure that you introduce her to another kid today, and just think about how you would feel if it was your first day of school and you didn’t know anybody.

So, I think for me as a mom, it’s important to always talk to her and tell her, “Think about that other person and how they’re feeling and what they’re going through.” So, I’m really proud of who she is because I think she is that person who thinks about other people and is always there to sort of extend a hand.

Great advice from a mom! Cheryl proves that she is nothing like her martini swilling character. 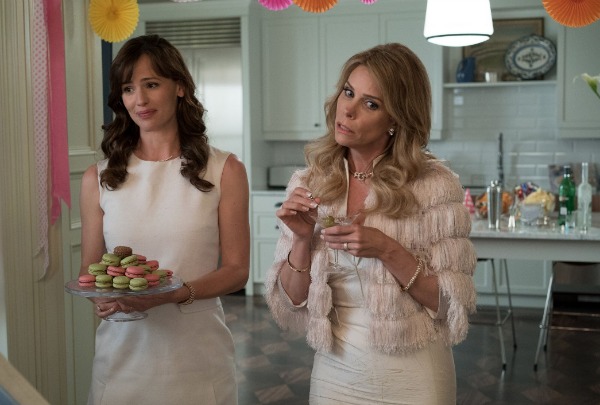 Tom Brand (Kevin Spacey) is a daredevil billionaire at the top of his game. His eponymous company FireBrand is nearing completion on its greatest achievement to date – the tallest skyscraper in the northern hemisphere. But Tom’s workaholic lifestyle has disconnected him from his family, particularly his beautiful wife Lara (Jennifer Garner) and his adoring daughter Rebecca (Malina Weissman).

Rebecca’s 11th birthday is here, and she wants the gift she wants every year, a cat. Tom hates cats, but he is without a gift and time is running out. His GPS directs him to a mystical pet store brimming with odd and exotic cats- where the store’s eccentric owner- Felix Perkins (Christopher Walken), presents him with a majestic tomcat, named Mr. Fuzzypants.

En route to present his daughter with her dream pet, a bizarre turn of events finds Tom trapped inside the body of Mr. Fuzzypants. Adopted by his own family, he begins to experience what life is truly like for the family pet, and as a cat, Tom begins to see his family and his life through a new and unexpected perspective. Meanwhile, his family adjusts to life with an odd and stubborn cat, and his son David (Robbie Amell), steps up in ways Tom never expected.

If any hope exists of returning to his family as the husband and father they deserve, Tom will have to learn why he has been placed in this peculiar situation and the great lengths he must go to earn back his human existence.

Get Your Tickets Today:

Don’t be the scaredy-cat in your family! ?Nine Lives in theaters now. Get your tickets:http://ninelivesmovie.com/tickets/

Get Social with Nine Lives and Mr. Fuzzpants here:

Disclosure: This event was hosted by EuropaCorp. All thoughts belong to me.