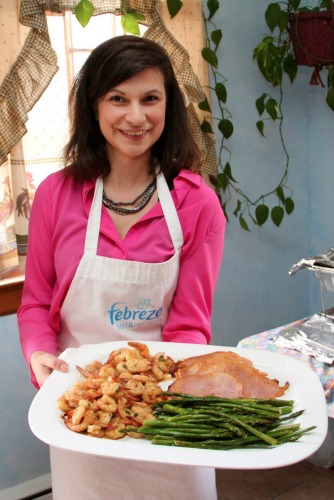 Every year we take turns in my family hosting the holidays. I haven’t had one in a while. I think the last time I hosted my entire family, except Noah, came down with the flu. It was awful. My son still refers to it as “The worst Christmas EVER!” I think it took him a week to open his gifts. I was angry, hurt and embarrassed all at the same time. This year my husband and I decided to host both of our families and just go with it. We have a humble sized home and fitting 20+ people would be a challenge, but the holidays are about being with friends and family. This year I wasn’t going to let anything or anyone ruin my day and I’m happy to say that it turned out to be a great one.

This Easter I learned that:

9. I always make too much food. ( I don’t know if it’s the Italian in me or the fact that my husband keeps telling me it’s not enough! Trust me I had more than enough food.)

8. I’m a crappy housekeeper. ( My husband cleaned while I planned and cooked. I’m not even going to tell you the size of some of the dust bunnies he found.)

6. my boys are happy to help. ( Not only did my son make a sushi appetizer, but he rolled over 70 meatballs for me. My other son volunteered to set the table and help guests when they arrived. Wow- they have grown up!)

5. we’ve gotten better at keeping people out of the kitchen. ( I’m sorry, but I just can’t talk and cook at the same time. Maybe that’s why I don’t have my own show-LOL!)

4. making a plan and sticking to it actually works. ( I timed everything to perfection. Sure, not everything worked, but it did make things run smoother.)

3. my husband and I can actually host a holiday and not fight. ( Oh yes, we do. Almost every single time, but not this time!)

2. I love to cook, I love to be challenged, I love entertaining. ( When you do the same old crap every day you forget the joy that can found in things like cooking. )

1. you can live by the saying, ” Do your best and forget the rest.” ( I recently interviewed Nicholas Sparks for his latest film The Longest Ride, and something he said really stuck with me. He said, “I can’t control what all of you are going to think about it. And you know what? It really doesn’t matter to me because I saw the film and I love the film. And I’m proud of that film.

And in the end, that’s really all I can control. So, I don’t try to get too caught up in what everyone else thinks or the power of anything else. I just want to know that when I put my head down at night, I did the best work that I could.” So, while I hope everyone enjoyed everything, I know that I did the best I could with what I had and I slept like a baby that night. Now, that’s control. )

I hope everyone had an amazing Spring Break. What was the best dish you ate during the Spring holidays?